Joss Whedon (@JossWhedon) created an innovative and popular sci-fi (space Western, really) TV series ‘Firefly’ (and a subsequent movie ‘Serenity’). Diehard ‘Firefly’ lovers have lamented for a decade the cancellation of the series, much like the die-hard fans protested the cancellation the original Star Trek TV series (and not without good cause).

A recent San Diego Children’s Book Examiner post, showed a hilarious mashup of ‘Muppets’ and ‘Game of Thrones’ by Yehudi Mercado (@ymercado). Here is an equally clever mashup of the ‘Muppets’, ‘Fraggles’, and ‘Firefly’ characters, affectionately and appropriately entitled ‘FireFrog’ by artist James Hance (@JimJeroo). You can purchase your own copy of this poster at http://www.jameshance.com/prints.html

Thanks to @LaurenDavis at @io9 for bringing this to our attention.

Kermit the Frog as Mal

From wikipedia.org:
“Kermit the Frog is puppeteer Jim Henson’s most famous Muppet creation, first introduced in 1955. He is the protagonist of many Muppet projects, most notably on The Muppet Show, and Sesame Street, as well as movies, specials, and public service announcements throughout the years.

Nathan Fillion as Malcolm “Mal” Reynolds—the owner of Serenity and former Independent sergeant in the pivotal Battle of Serenity Valley. Malcolm grew up on a ranch, and was raised by his mother and the ranch hands. In the Unification War, he fought for the Independent Army, the “Browncoats”, as a platoon sergeant in the 57th Overlanders. He is cunning, a capable leader and a skilled fighter. Mal’s main character drive is his will for independence. While he is not above petty theft, smuggling or even killing to maintain his free lifestyle, he is generally honest in his dealings with others, fiercely loyal to his crew and closely follows a personal moral code.”

From wikipedia.org:
“Miss Piggy is a Muppet character who was primarily played by Frank Oz on The Muppet Show. In 2001. Miss Piggy began as a minor character on The Muppet Show TV series, but gradually developed into one of the central characters of the show. She is a pig, specifically, a mangalitsa who is convinced she is destined for stardom, and nothing will stand in her way. She has a capricious nature, at times determined to convey an image of feminine charm, but suddenly flying into a violent rage (accompanied by her trademark “hi-yah!”) whenever she thinks someone has insulted or thwarted her. Kermit the Frog is often the target of her alternating anger and affection.

Morena Baccarin as Inara Serra—a Companion, which is the 26th century equivalent of an escort, mistress, hetaera, courtesan, or oiran, who rents one of the Serenity’s two small shuttles. Inara enjoys high social standing. Her presence confers a degree of legitimacy and social acceptance the crew of Serenity would not have without her on board. As a highly educated Hooker with a heart of gold, Inara displays great dignity, civility and compassion. There is strong romantic tension between her and Mal, who share many character traits, but each jokingly objects to the other’s “whoring” or “petty theft”, respectively. Both neglect to act on their feelings, and try to keep their relationship professional.”

From muppet.wikia.com/wiki/:
“Wembley Fraggle is one of the five main Fragglecharacters in Fraggle Rock. His skin is yellowish green. He has a long nose and big movable eyes, and a big tuft of yellow hair on his head. He usually wears a banana tree shirt.”

From wikipedia.org:
“Alan Tudyk as Hoban “Wash” Washburne—Serenity’s pilot and Zoe’s husband. Deeply in love with his wife, Wash expresses jealousy over his wife’s “war buddy” relationship and unconditional support of their captain, most particularly in the episode “War Stories”, in which he confronts Mal regarding their relationship. He joined pilot training just to see the stars, which were invisible from the surface of his polluted homeworld, and he joined Serenity despite being highly sought after by other ships. He is very light-hearted and tends to make amusing comments, despite the severity of any situation.”

From muppet.wikia.com/wiki/:
“Red Fraggle is one of the five main Fraggles in Fraggle Rock. She is yellow and her hair is red with yellow and orange highlights which is always in big pigtails. She usually wears a red sweater and has the most hair of any Fraggle.”

From wikipedia.org:
“Gina Torres as Zoe Alleyne Washburne—second-in-command onboard Serenity, a loyal wartime friend of Captain Reynolds, and the wife of Wash. Her surname during the Unification War was Alleyne. She was born and raised on a ship and served under Mal during the war as a corporal. Described by her husband as a “warrior woman”, she is a capable fighter who keeps calm even in the most dangerous situations. She demonstrates an almost unconditional loyalty to Mal, the only exception noted being her marriage to Wash, which the captain claims was against his orders.”

From wikipedia.org:
“Fozzie Bear is a Muppet, created by Jim Henson. He is an orange, particularly fuzzy bear who works as a stand-up comic and has a catchphrase, “Wocka Wocka Wocka!”. Shortly after telling the joke, he is usually the target of rotten tomatoes and ridicule, especially from hecklers Statler and Waldorf. He wears a brown pork pie hat and a red and white polka-dot necktie.

Adam Baldwin as Jayne Cobb—hired gun. He and Mal met on opposite sides of a rivalry; Mal, while held at gunpoint, offered Jayne his own bunk and a higher cut than his current employer, so he turned coat and shot his then-partners. He is someone who can be depended on in a fight. He tends to act like a “lummox” who thinks he is the smartest person in space, but occasional hints of intelligence peek through this façade, giving the impression that he acts dumber than he is.”

Sam the Eagle as Shepherd 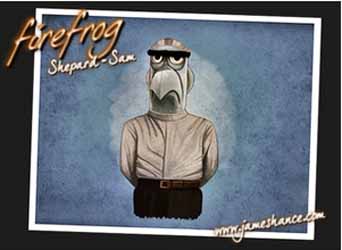 From wikipedia.org:
“Sam the Eagle is a character from the syndicated television show The Muppet Show, performed byFrank Oz. Sam’s patriotic spirit differentiates him from the rest of the Muppet cast, as does his general stuffiness and pomposity. Because of this, it has been a running gag in either The Muppet Show, or Muppet movies, that shows his patriotism towards the United States.

Ron Glass as Derrial Book—a Shepherd (equivalent to a pastor). Although presented as a devout Christian, Book has profound knowledge about criminal activities and police corruption. In “Safe”, he was shown to have sufficient status in the Alliance to receive medical treatment from the military with no questions asked. He is also proficient in hand-to-hand combat and the use of firearms. While objecting to violence most of the time, on a rescue mission he joins the fight, stating that while the Bible is quite specific about killing, it is “somewhat fuzzier on the subject of kneecaps”. Book is a moral guide for Mal and the rest of the crew, a voice of reason, conscience and spirituality. Ironically, he seems to get along well with the amoral mercenary Jayne, with whom he works out repeatedly.” 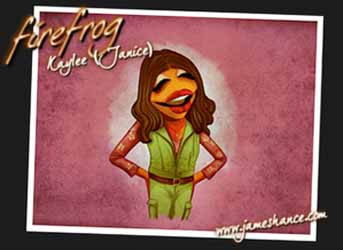 From muppet.wikia.com/wiki/:
“Janice is the lead guitar player in the Electric Mayhem onThe Muppet Show. She also portrays Nurse Janice inVeterinarian’s Hospital, and appears in various other sketches, frequently as a chorus member. She is occasionally seen in the orchestra during the fifth season of the show. She has a very close relationship with the Electric Mayhem’s bass player, Floyd Pepper (although, in the first season of The Muppet Show, she’s involved withZoot in the At the Dance sketch).”

From wikipedia.org:
“Jewel Staite as Kaywinnet Lee “Kaylee” Frye—the ship’s mechanic. In the episode “Out of Gas”, it is established that she has no formal training, but keeps Serenity running with an intuitive gift for the workings of mechanical equipment. Jewel Staite explains Kaylee’s character as being wholesome, sweet, and “completely genuine in that sweetness”, adding “She loves being on that ship. She loves all of those people. And she is the only one who loves all of them incredibly genuinely.] She has a crush on Dr. Simon Tam.”

From wikipedia.org:
“Beaker is a Muppet character from The Muppet Show. He is the shy, long-suffering assistant of Dr.Bunsen Honeydew, and is likewise named after a piece of laboratory equipment, although his shape more closely resembles an Erlenmeyer flask.

Sean Maher as Dr. Simon Tam—a medical researcher and trauma surgeon of the first caliber (top 3% in his class at a top core-planet institution), who is on the run after breaking his sister River out of a government research facility. In the episode “Safe”, it is revealed that he and River had a privileged upbringing with access to the best education. Simon sacrificed a highly successful future in medicine, over his stern father’s severe objections, when he rescued River. His bumbling attempts at a romantic relationship with Kaylee are a recurring subplot throughout the series, and at every turn he seems to find a way to unwittingly foil his own attempts at romance. His life is defined by caring for his sister.” 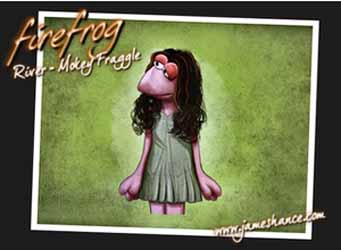 From http://muppet.wikia.com/wiki/:
“Mokey Fraggle is one of the five main Fraggles in Fraggle Rock. She has mauve skin with darker purple fur, long turquoise hair, and wears a long gray robe-like sweater, which is worn open. She wears a ring on a string of beads around her neck.”

From wikipedia.org:
“Summer Glau as River Tam—smuggled onto the ship by her brother. A highly intelligent, compassionate and intuitive child prodigy. Experiments and invasive brain surgery at an Alliance secret facility left her delusional, paranoid, and at times violent, though her uncanny ability to seemingly sense things before they happen leaves question to where the delusions end and reality begins for her. The experiments seemed to have made her a psychic, providing her with a seemingly innate ability in hand-to-hand combat, and she is capable of killing or incapacitating several stronger opponents with ease. She gets frequent fits of anxiety and experiences post-traumatic flashbacks of her time in the Alliance facility. Her mental instability and uncanny abilities, paired with several erratic and violent acts, is a recurring source of fear and doubt among the crew, especially with Jayne, who very frequently requests that they be taken off the ship.”