Jane Yolen, often called “the Hans Christian Andersen of America” (Newsweek) is the author of well over 335 books (she has lost count), including OWL MOON, THE DEVIL’S ARITHMETIC, and HOW DO DINOSAURS SAY GOODNIGHT. Her work has won an assortment of awards–two Nebulas, a World Fantasy Award, a Caldecott, the Golden Kite Award, three Mythopoeic awards, two Christopher Medals, a nomination for the National Book Award, and the Jewish Book Award, among many others. She has been nominated three times for the Pushcart Prize. She is also the winner (for body of work) of the World Fantasy Assn. Lifetime Achievement Award, Science Fiction Poetry Association Grand Master Award, the Catholic Library’s Regina Medal, the Kerlan Medal from the University of Minnesota, the 2012 du Grummond Medal, the Smith College Alumnae Medal. Six colleges and universities have given her honorary doctorates. 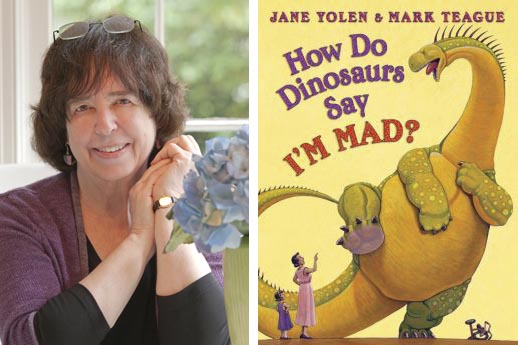 All ages, all genres except hard science. (Though I have written a lot of Natural Science.)

What do you hope readers will get from reading those books?

Enlightenment, entertainment, and an appreciation for poetry.

Henry: My poor poetry-writing ability is limited to limericks involving the word “Nantucket.”

Getting editors to get back to me!

Henry: Hah! Well, editors are notoriously overworked. And with over 300 books under your belt, something tells me anyone would have trouble keeping up with you.

Never give up, revise, and keep my BIC (butt in chair).

Henry: For those not familiar with the term, BIC refers to focusing on doing the writing. Technically, if you prefer to write while standing or bathing, that is also acceptable.

Getting letters from children and grownups saying that my stories and poems and essays had changed their lives.

Henry: If only we could have gotten Vladimir Putin to read ‘How Do Dinosaurs Say I’m Mad?’

If you give up at the first rejection or the first bad review, you will never make it in publishing.

Henry: A writer must be thick-skinned. Like the Ankylosaurus!

Henry: “See how she leans her cheek upon her hand. O, that I were a glove upon that hand. That I might touch that cheek!” ― William Shakespeare, Romeo and Juliet

Henry: No hard rock music blasting in the background? No dinosaur models on a nearby shelf?

To bring world peace and the perfect story to the world.

Henry: Nothing like aiming high! And that is the most altruistic superpower anyone has mentioned on this blog.

If you could have three authors over for dinner, who would you choose?

Emily Dickinson, James Thurber, and Isak Dinesen. Because they would make great conversation, tell amazing stories about their lives, and might possibly drop wisdom into my ear.

Henry: That’s a lovely trio. For the younger readers of this blog, Wikipedia helpfully elaborates:

“Emily Elizabeth Dickinson (1830 –1886) was an American poet. While Dickinson was a prolific private poet, fewer than a dozen of her nearly eighteen hundred poems were published during her lifetime. Dickinson’s poems are unique for the era in which she wrote; they contain short lines, typically lack titles, and often use slant rhyme as well as unconventional capitalization and punctuation. Many of her poems deal with themes of death and immortality.”

“James Grover Thurber (1894 –1961) was an American cartoonist, author, journalist, and celebrated wit. Thurber was best known for his cartoons and short stories, published mainly in The New Yorker magazine and collected in his numerous books. One of the most popular humorists of his time, Thurber celebrated the comic frustrations and eccentricities of ordinary people.”

“Karen von Blixen-Finecke (1885 – 1962), née Karen Christenze Dinesen, was a Danish author also known by her pen name Isak Dinesen. Blixen is best known for ‘Out of Africa’, her account of living in Kenya, and one of her stories, ‘Babette’s Feast’, both of which have been adapted into highly acclaimed, Academy Award-winning motion pictures.”

Read, go for a walk, watch a movie, go to live music or live theater, wander a museum or castle, or play with a grandchild.

Henry: The only castles nearby in which I can wander are in my imagination.

She wrote many good books and one great one

Wherever books are sold or can be ordered, and in any school or public library. Also there are some on kindle and other ebook readers.

This interview is also posted on the San Diego Children’s Books Examiner.