Anita Grace Howard is the author of the Splintered series. The first book, Splintered, captures the grotesque madness of a mystical under-land, as well as a girl’s pangs of first love and independence. Alyssa Gardner hears the whispers of bugs and flowers–precisely the affliction that landed her mother in a mental hospital years before. This family curse stretches back to her ancestor Alice Liddell, the real-life inspiration for Lewis Carroll’s Alice’s Adventures in Wonderland. Alyssa might be crazy, but she manages to keep it together. For now. When her mother’s mental health takes a turn for the worse, Alyssa learns that what she thought was fiction is based in terrifying reality. The real Wonderland is a place far darker and more twisted than Lewis Carroll ever let on. There, Alyssa must pass a series of tests, including draining an ocean of Alice’s tears, waking the slumbering tea party, and subduing a vicious bandersnatch, to fix Alice’s mistakes and save her family. She must also decide whom to trust: Jeb, her gorgeous best friend and secret crush, or the sexy but suspicious Morpheus, her guide through Wonderland, who may have dark motives of his own. 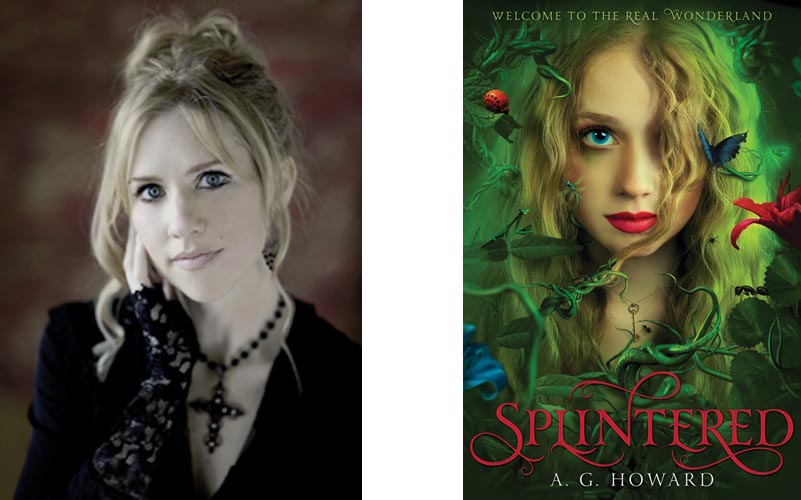 Anita lives in the Texas panhandle, and is most at home weaving the melancholy and macabre into settings and scenes, twisting the expected into the unexpected. She’s inspired by all things flawed, utilizing the complex loveliness of human conditions and raw emotions to give her characters life, then turning their world upside down so the reader’s blood will race.

Married and mother of two teens (as well as surrogate mom to two Labrador retrievers), Anita divides her days between spending time with her family and plodding along or plotting on her next book.

When she’s not writing, Anita enjoys rollerblading, biking, snow skiing, gardening, and family vacations that at any given time might include an impromptu side trip to an 18th century graveyard or a condemned schoolhouse for photo ops.

Finding time to do it. I’m a mother and a wife, and along with social media, traveling events, and interviews/emails to answer, it’s hard to shut out the world and just write. Before I was published, the hardest part was believing in myself. But now that I have readers who like the stories/characters, a publisher, and a blossoming career, even though it’s validating, it raises a whole new world of challenges.

I would have the power to clone myself. As to why, see my answer to question #1. 😉

Henry: That is the most popular answer, along with slowing time, of my author interviewees.

Henry: What? Charlotte the spider dies!? Spoiler Alert next time!

Unicorns. But I don’t envision them as easily-fettered creatures whose bones are fine and breakable like birds. In my mind, they have the size and musculature of Clydesdales. They’re large and powerful, yet quiet and wise. Introverted but observant. If necessary, they can be vicious, although to the pure of heart, they’re gentle and kind. They’re a study of contradictions, as all the best mythological beasts are. Obviously, I hope to write about these creatures one day. 🙂

Henry: I appreciate your sentiment, although I feel like unicorns have become a little clichéd, like vampires. I wrote a picture book that features several fantasy creatures auditioning to become a boy’s pet. The unicorn clumsily punctures the boy’s football and soccer ball.

Actually, it’s an epiphany that came to me when I left my first agent, and saved me during my stages of editing the Splintered series.  (This can also apply to unpublished writers, too, via critiquer and agent feedback). If a writer is serious about getting published, they have to be flexible without compromising. I know that sounds contradictory, but there is a way to do it … a formula: Know the difference between pride and vision. If people are telling you to change something in your book that you love, stand back and ask yourself why you love it. Is it personal to you? Something that other people, including your readers one day, are likely not to connect with? Or is it something integral to the characters in your story. Something that’s a part of them? That’s the difference between pride and vision. Pride applies to the glory it brings you. Vision applies to the glory it brings your characters. Never make changes that will compromise your character(s) or their arc, which ultimately IS your book’s vision. But be humble enough to let go of pride and make a change if it will still be true to your character while making your book a more solid read.

Henry: A terrific piece of advice. It reminds me of the well-known “murder your darlings” from Sir Arthur Quiller-Couch, to wit:

“To begin with, let me plead that you have been told of one or two things which Style is not; which have little or nothing to do with Style, though sometimes vulgarly mistaken for it. Style, for example, is not–can never be–extraneous Ornament. You remember, may be, the Persian lover whom I quoted to you out of Newman: how to convey his passion he sought a professional letter-writer and purchased a vocabulary charged with ornament, wherewith to attract the fair one as with a basket of jewels. Well, in this extraneous, professional, purchased ornamentation, you have something which Style is not: and if you here require a practical rule of me, I will present you with this: “Whenever you feel an impulse to perpetrate a piece of exceptionally fine writing, obey it–wholeheartedly–and delete it before sending your manuscript to press. Murder your darlings.”

This interview is also posted at the San Diego Children’s Books Examiner.