Sherwood Smith studied in Europe before earning a masters in history. She worked as a governess, a bartender, an electrical supply verifier, and wore various hats in the film industry before turning to teaching for 20 years. Her first book was published in 1986. To date she’s published over forty books, nominated for several awards, including the Nebula, the Mythopoeic Fantasy Award, and an Anne Lindbergh Honor Book. 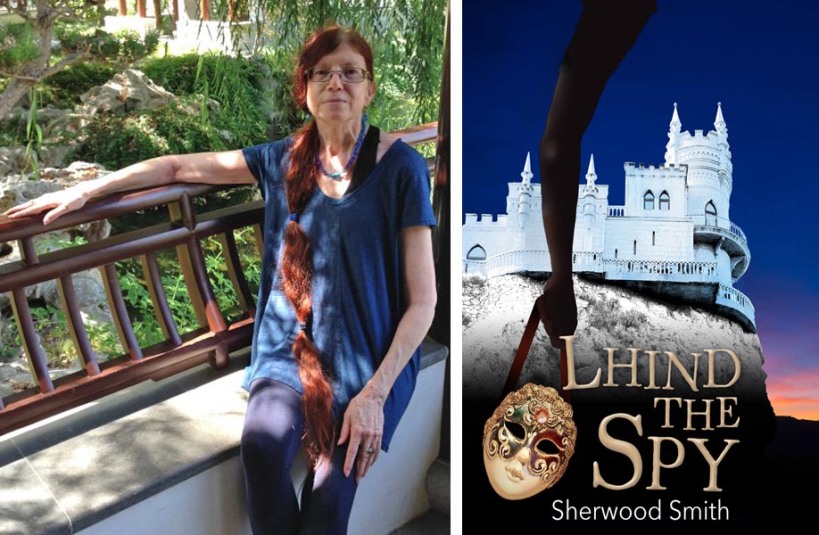 Anywhere from middle grade to adult. Mostly fantasy, with some science fiction, historical romance, and a couple of contemporary stories.

My latest book is Lhind the Spy, sequel to Lhind the Thief.

First and most important, entertainment! These are meant to be pleasant wish-fulfillment reads, though I can’t help slipping in explorations of family, moral awareness, and questions of personal agency.

Rewriting. I am a visual writer, which means I see the story in my head and write it down. That’s the easy fun part.

After that, the real struggle is to try to look past the images to determine if the words I’ve chosen actually get the images, sounds, tastes, and smells onto the page, or if they are just functioning as hypertext for rewinding the movie in my head, which does my reader no good, not having a functional tinfoil hat for me to beam my images directly to their brains!

Seeing what words I wrote down is difficult for me, and I can do upwards of twenty-five drafts for a tough scene, and still not be sure the words are the right ones.

Henry: I’m still trying to get the image out of you in a tinfoil hat out of my head.

That just because I might feel passionate, or deeply moved to the point of anguish, about something I wrote, the reader is not necessarily going to feel that passion. Though readers will often toss off a careless “That was a stupid book,” or “That sure was a piece of trash,” I think I can confidently say that no writer sets out to write a bad book. Behind every book is a writer who worked hard, and believes their book to be good, special, unique.

As for me, I have a tough time trying to find the words to get that passion across—and even if I manage successfully for one reader, I have learned from reading reviews that another reader will yawn and flit away to something they find more interesting.

Henry: I use the analogy of foods when I talk to my kids about writing. Some people may like pizza with anchovies, and others may not. Since it’s a matter of taste, they are both right.

Someone writing to me to say that my book saved their life.

Read, read, read. Read as widely as you can, about everything. Read outside your favorite area, so that you don’t end up rewriting the kind of story you love most. And if you do at first, that’s okay, because it’s good practice.

Observe real people doing real things. A writer needs to try to understand the world before she can reflect it—and maybe even change it. Learn how to rewrite earlier than I did, which means learning how to give and take critique in a constructive way. And most of all, have fun! If you don’t have fun, your reader won’t.

Henry: I can’t emphasize enough how helpful my critique groups are to improving my stories. If we have blind spots, we don’t know about them (by definition). So, outside pairs of eyes are invaluable.

“It is certainly not then—not in dreams—but when one is wide awake, in moments of robust joy and achievement, on the highest terrace of consciousness, that mortality has a chance to peer beyond its own limits, from the mast, from the past and its castle tower. And although nothing much can be seen through the mist, there is somehow the blissful feeling that one is looking in the right direction.”
—Vladimir Nabokov, Speak, Memory

“But the effect of her being on those around her was incalculably diffusive: for the growing good of the world is partly dependent on unhistoric acts; and that things are not so ill with you and me as they might have been, is half owing to the number who lived faithfully a hidden life, and rest in unvisited tombs.”
― George Eliot, Middlemarch

Nope. I learned early to write anywhere, anytime, no matter how noisy or quiet. But when I was a young teen, I wrote everything by hand, and for a while I was so nearsighted (before I got glasses) that I bent closer and closer to the page, until my nose would sometimes get black ink on the end from touching the page. Especially when I wrote late at night by the light of the streetlamp across the street, while my sister was asleep in the other bed.

Henry: I hereby proclaim that “She’s got ink on her nose” to be an idiom denoting intensely hardworking.

Immortality (with good health) because there is not nearly enough time to travel where I wish to, to learn the languages I would love to speak, to read all the books and hear all the music and see all the plays and talk to all the people.

Henry: No one’s asked for that in any of my other interviews, which is surprising given how useful that power would be.

Jane Austen, Andrzej Tadeusz Bonawentura Kościuszko, and Christine de Pisan. I don’t know how much they would have to say to one another, assuming they could make themselves understood, but they all sound like they were endlessly witty and fascinating, the women would have a great deal to say about writing, culture, and the agency of women, and Kościuszko would have much to say about his sympathies and ardent beliefs in the rights and the freedoms of ordinary human beings, though he consorted with rulers of a number of countries.

Andrzej Tadeusz Bonawentura Kościuszko – February 4 or 12, 1746 – October 15, 1817) was a Polish-Lithuanian military engineer and a military leader who became a national hero in Poland, Lithuania, Belarus, and the United States. He fought in the Polish-Lithuanian Commonwealth’s struggles against Russia and Prussia, and on the American side in the American Revolutionary War. As Supreme Commander of the Polish National Armed Forces, he led the 1794 Kościuszko Uprising.

In 1796, Kościuszko emigrated to the United States. A close friend of Thomas Jefferson, with whom he shared ideals of human rights, Kościuszko wrote a will in 1798 dedicating his American assets to the education and freedom of U.S. slaves.

Christine de Pisan – 1364 – c. 1430 – was an Italian French late medieval author. She served as a court writer for several dukes (Louis of Orleans, Philip the Bold of Burgundy, and John the Fearless of Burgundy) and the French royal court during the reign of Charles VI. She wrote both poetry and prose works such as biographies and books containing practical advice for women. She completed forty-one works during her 30-year career from 1399–1429. She married in 1380 at the age of 15, and was widowed 10 years later. Much of the impetus for her writing came from her need to earn a living to support her mother, a niece and her two surviving children. She spent most of her childhood and all of her adult life in Paris and then the abbey at Poissy, and wrote entirely in her adopted language, Middle French.

The phoenix, the bird of fire, light, and renewal.

Henry: Ironically, Phoenix, AZ is home to many snowbirds.

Travel, talk to people, listen to music, eat good food, play with the dogs, and of course read.

What would you like it to (accurately) say on your tombstone?

All the usual on-line booksellers, plus sometimes brick and board stores might carry a few of my books. If one is to order on-line, I encourage people to try Book View Café, a consortium of writers whose volunteer labor means we get most of the royalties. My books with them are here: http://bookviewcafe.com/bookstore/bvc-author/sherwood-smith/

Henry: Thank you for joining us, Sherwood. This interview is also posted on the San Diego Children’s Books Examiner.