Vincent X. Kirsch had always wanted to work in picture books. For three decades, he tried as hard as he could to get a foot in the door. Publishers told him he either needed a published book to get considered at all or that his work was too sophisticated or unusual for picture books.

Mr. Kirsch gave up and enjoyed the successes of his friends who were doing well in picture books. But he never forgot his dream. Then one day, out of the blue, an editor had seen an illustration of his in The New York Times Book Review and asked if he were interested in illustrating picture books.

It only took twenty-four years to get his chance.

My past books that I have written and illustrated are fiction for first through third grades. I illustrate mostly non-fiction for that same age group.

My latest book that I wrote and illustrated is the second in a series with Disney/Hyperion about a friendship between a dinosaur named Freddie and a dragon named Gingersnap. The first book was conceived as a dance piece, a tribute to Fred Astaire and Ginger Rogers. The second book was about music and the importance of having music in your life so that you can find your song to sing.

Henry: Having seen both Freddie & Gingersnap books, I can attest to the terrific artwork. 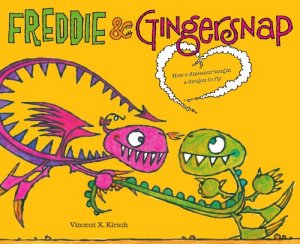 Since the song from within the story is published on the inside back cover, I had hoped that the reader would pick up the book and their favorite instrument and play it or just sing it aloud. Not that I want the reader to sing a song that is not their own, but perhaps it might lead them to take the chance to make some music and find their own song.

Henry: I’m not sure you’d want ME singing your song…

Keeping it simple. I think that I am born to write epic adventures. I have a zillion characters, story lines and messages to convey. I am working very hard to keep it simple and stay focused. It is very difficult. I love to invent characters and adventures. They often take me for a ride rather than letting me quiet them down and take charge.

That there are rules and tools. An editor put it very well, she told me that as an artist, I have a whole studio full of art supplies to make whatever I can imagine. Likewise, she pointed out, writers have supplies to bring their stories to life. I must develop my writing tool box. I can draw anything. Writing is a very new adventure for me. I need to learn how to write anything with similar ease.

Henry: I’ve noticed that most author/illustrators start as illustrators, and then add the writing skill. I have this theory (as a writer only) that anyone can become a writer, but not everyone has the eye/hand for artwork.

I would not have had the chance to be among the first visitors to be invited to Sandy Hook Elementary School in Newtown, Connecticut after the terrible tragic shooting there. The students had offers from all sorts of celebrities (musicians, sports heroes, superheros, movie stars, etc) to visit them and they got to vote. It was unanimous, they wanted book authors and illustrators. I was lucky enough to be one of those invited.

Be true. Be new. Be you.
I found that posted on the door of an editor office at Disney/Hyperion and copied it down. It says it all!

Henry: What if one’s a terrible writer? Should one be someone else in that scenario?

I like to write on my 11” apple laptop. I like the portable aspect of it.
I usually write at a desk.
I am a “night owl”.
I love to fill three ring folders for each project.
I punch holes with a three-hole perforator into plain sheets of paper to fill the folders.
I listen to music mixes from the “focus” and “mood” categories on Spotify or… I just have Murray Perahia’s album of the complete Mozart Piano Concertos playing all day!
I doodle characters constantly in little Moleskine notebooks.
I could not get along without quite a collection of Pilot Hi-Tec C pens from Japan. (Black 0.4)

Henry: There is this new invention that may interest you. Pre-punched paper. You’re welcome.

Write a book series as wonderful as the Moomintroll books. I go looking for it in bookstores wherever I go, and no one has written it yet. Those books of mine might just save some imaginations.

Henry: Moomintroll is the main character in the MOOMIN books by Tove Jansson. Moomintroll lives in the Moominhouse, together with his father Moominpappa and his mother Moominmamma.

Oscar Wilde, Charles Dickens & Tove Jansson. I would bet they are excellent talkers and I have a lot of questions for each of them.

Jansson is best known as the author of the Moomin books for children. The first such book, The Moomins and the Great Flood, appeared in 1945, though it was the next two books, Comet in Moominland and Finn Family Moomintroll, published in 1946 and 1948 respectively, that brought her fame.”

Wizards. I love magic and I love the idea that such wise, conjuring and knowing persons exist.

Henry: Be careful what you wish for. You might get a Voldemort instead of a Gandalf. “Do not meddle in the affairs of wizards, for they are subtle and quick to anger.” ― J.R.R. Tolkien

Not listed in in any particular order:
Swim, travel around the world, wander bookstores and libraries, teach my little dog new tricks, cook, read, sketch, build toy theaters, go the theater, work in the theater, create animated tv, games and films, play some music on either a guitar or ukulele.

REMEMBER TO LOVE.
IT IS ALL THAT YOU CAN TAKE WITH YOU.

Henry: Nice. Thanks for spending time with us, Vincent. This interview is also posted on the San Diego Children’s Books Examiner.