Lisa Brown is a New York Times bestselling illustrator, author, and cartoonist. Her books for young’uns include HOW TO BE, BABY MIX ME A DRINK, THE LATKE WHO COULDN’T STOP SCREAMING by Lemony Snicket, EMILY’S BLUE PERIOD by Cathleen Daly, and MUMMY CAT by Marcus Ewert. She teaches picture book writing and illustration at the California College of the Arts. Her most recent book, THE AIRPORT BOOK, is about the airport. She lives in San Francisco. 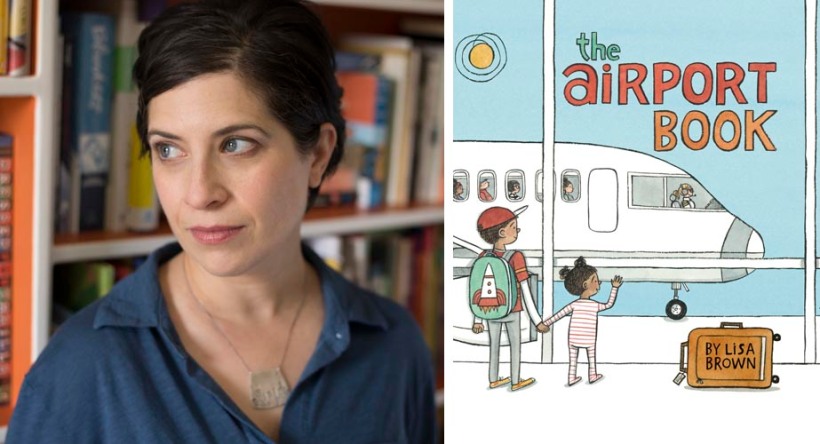 A better question might be “for what age audience DON’T you write?” I’ve created humor books and comics for adults, picture books for kiddos, one co-authored illustrated novel for teens (PICTURE THE DEAD, with Adele Griffin), and I am blissfully at work on a YA graphic novel.

Henry: FYI, the YA graphic novel is entitled THE LIVING DOLL, and tells the story of conjoined twins who remain connected even after one of them dies during the operation to separate them.

It’s a picture book about the airport. Called, creatively, The Airport Book.

I hope to demystify and mystify an airline journey.

Henry: Always burning the candle at both ends, eh?

Perhaps the most challenging thing is letting it out of my hands. I always think that there is more to be done.

Henry: I agree. I suspect sculptors feel the same way, although it’s worse for them. If they remove something, it’s much harder to put it back.

Henry: So true! Note: this is not a criticism of Amazon. Rather, it is advice about reviews in general. The good ones tell you what you already know, and the bad ones make you sad or frustrated. My writer friend Deborah Underwood got a bad review because the book arrived damaged! My bedtime picture book MABEL AND THE QUEEN OF DREAMS was dinged for not having enough action!

You can’t write well if you don’t read well. Read. Read everything. Read like a writer, with one eye always on craft.

Henry: A lion is the product of all the zebras it’s eaten. I read critically now, although I find it can take some of the joy out of reading others’ picture books.

“Oh, life is a glorious cycle of song,
a medley of extemporanea,
And love is a thing that can never go wrong,
and I am Marie of Romania.” —Dorothy Parker

Henry: That is my life’s work, and we don’t have room here…

Invisibility. It would be useful while eavesdropping, an activity important to any writer. And relaxing for introverts like me.

Henry: Invisibility is a good choice. Like mind reading, though, it could lead to learning things you really don’t want to know…

I already have an author over for dinner almost every night, my husband, Daniel Handler (http://www.danielhandler.com). So maybe I’d choose some other kind of artist. I’d have loved to have dined with David Bowie, of blessed memory, Dorothy Parker, and Edward Gorey.

“From a conflicted and unhappy childhood, Parker rose to acclaim, both for her literary output in publications such as The New Yorker and as a founding member of the Algonquin Round Table. Following the breakup of the circle, Parker traveled to Hollywood to pursue screenwriting. Her successes there, including two Academy Award nominations, were curtailed when her involvement in left-wing politics led to a place on the Hollywood blacklist.”

“Edward Gorey was an American writer and artist noted for his illustrated books. His characteristic pen-and-ink drawings often depict vaguely unsettling narrative scenes in Victorian and Edwardian settings. He illustrated works as diverse as DRACULA by Bram Stoker, THE WAR OF THE WORLDS by H. G. Wells, and OLD POSSUM’S BOOK OF PRACTICAL CATS by T. S. Eliot.”

I always really, really wanted the Borrowers to exist.

Henry: A fine choice. Note: THE BORROWERS is a children’s fantasy novel by Mary Norton, featuring four-inch tall people who borrow things from their human hosts.

Please stay off the grass.

In bookstores and libraries, naturally. And online… I post my daily sketches on my Tumblr, here: http://americanchickens.tumblr.com. They can also take a peek at my Three Panel Book Reviews, which will be collected and expanded into a book by Algonquin Books, here: http://threepanelbookreview.tumblr.com

Henry: Thanks for spending time with us, Lisa.