I don’t know why I didn’t compile this sooner. Nearly the entirety of Monty Python and the Holy Grail is quote-worthy. Enjoy! 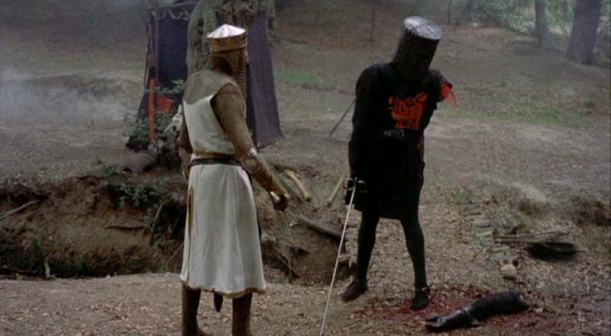 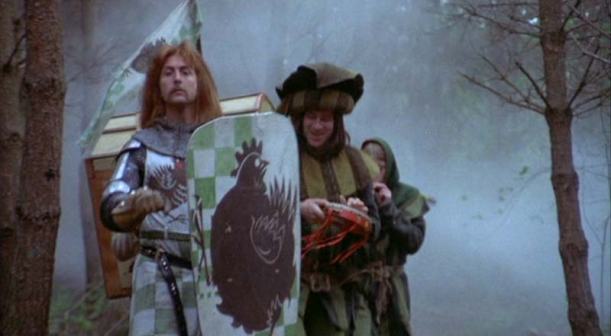 Minstrel: [singing] He is packing it in and packing it up And sneaking away and buggering off And chickening out and pissing off home, Yes, bravely he is throwing in the sponge. 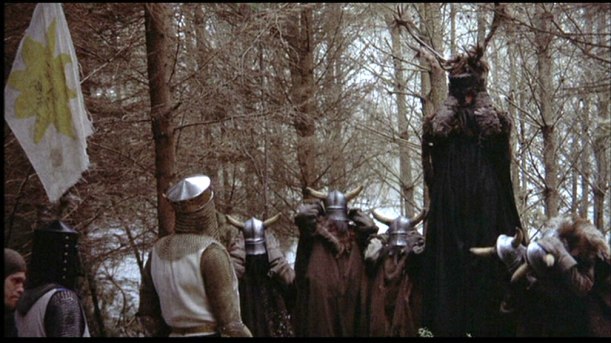 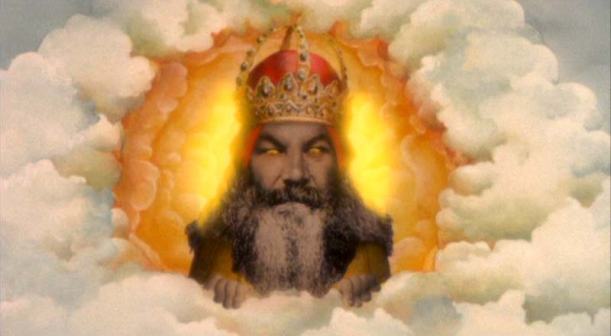 God: Every time I try to talk to someone it’s “sorry this” and “forgive me that” and “I’m not worthy”…

God: What are you doing now?
King Arthur: Averting our eyes, oh Lord.
God: Well, don’t. It’s just like those miserable psalms, they’re so depressing. Now knock it off!

God: Arthur, King of the Britons, your Knights of the Round Table shall have a task to make them an example in these dark times.
King Arthur: Good idea, O Lord!
God: ‘Course it’s a good idea! 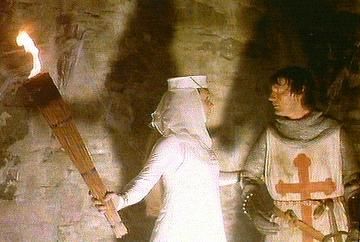 Dingo: You must spank her well, and after you are done with her, you may deal with her as you like… and then… spank me.
All: And me. And me too. And me.
Dingo: Yes. Yes, you must give us all a good spanking.
Dingo: And after the spanking, the oral sex.
Galahad: Well, I could stay a bit longer… 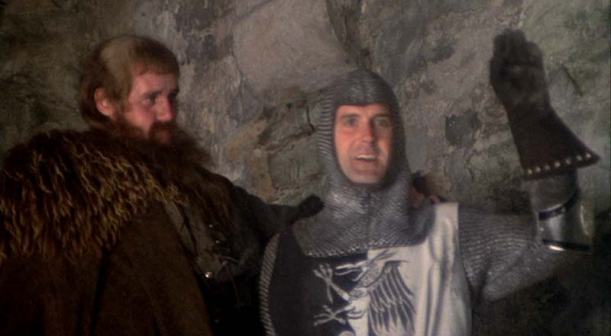 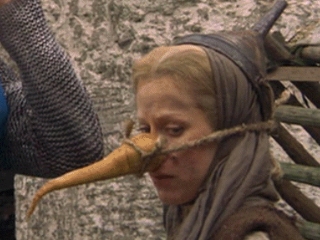 Sir Bedevere: What makes you think she’s a witch?
Peasant 3: Well, she turned me into a newt!
Sir Bedevere: A newt?
Peasant 3: [meekly after a long pause] … I got better.
Crowd: [shouts] Burn her anyway! 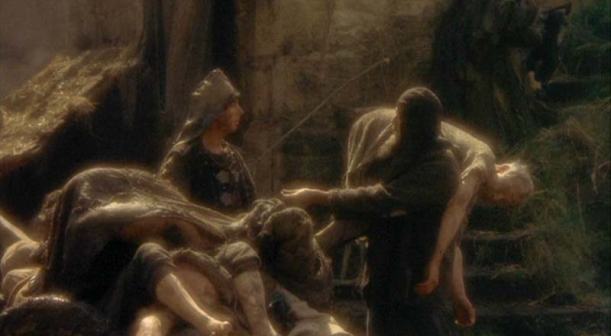 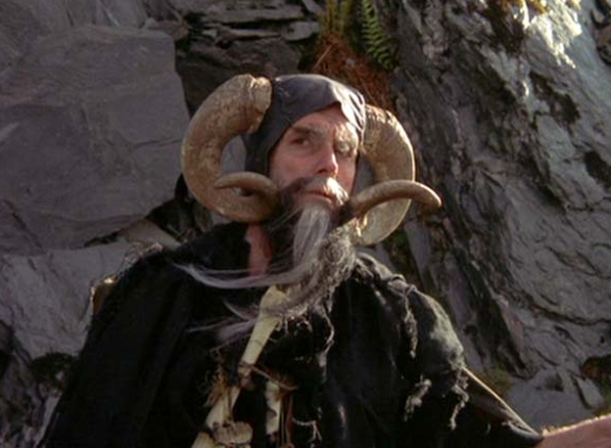 King Arthur: Who are you who can summon fire without flint or tinder?
Tim: There are some who call me… Tim.

Tim: Follow. But! Follow only if ye be men of valor! For the entrance to this cave is guarded by a creature so foul, so cruel, that no man yet has fought with it… and lived! BONES of full fifty men lie *strewn* about its lair! So! Brave knights! If you do doubt your courage or your strength, come no further, for death awaits you all with nasty, big, pointy teeth…
[Makes fangs with his fingers and holds them in front of his mouth]
King Arthur: What an eccentric performance. 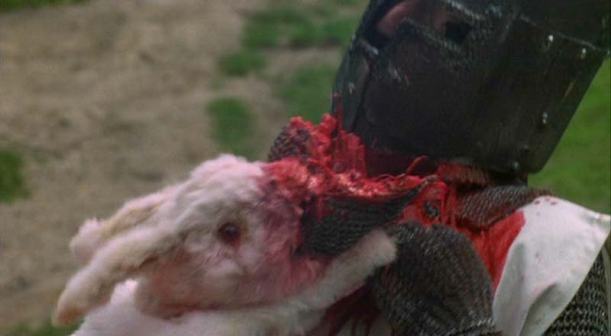 Tim: There he is!
King Arthur: Where?
Tim: There!
King Arthur: What? Behind the rabbit?
Tim: It *is* the rabbit!
King Arthur: You silly sod!
Tim: What?
King Arthur: You got us all worked up!
Tim: Well, that’s no ordinary rabbit.
King Arthur: Ohh.
Tim: That’s the most foul, cruel, and bad-tempered rodent you ever set eyes on!
Sir Robin: You tit! I soiled my armor I was so scared!
Tim: Look, that rabbit’s got a vicious streak a mile wide! It’s a killer!
Sir Galahad: Get stuffed!
Tim: He’ll do you up a treat, mate.
Sir Galahad: Oh, yeah?
Sir Robin: You manky Scots git!
Tim: I’m warning you!
Sir Robin: What’s he do? Nibble your bum?
Tim: He’s got huge, sharp… er… He can leap about. Look at the bones!
King Arthur: Go on, Bors. Chop his head off!
Sir Bors: Right! Silly little bleeder. One rabbit stew comin’ right up! 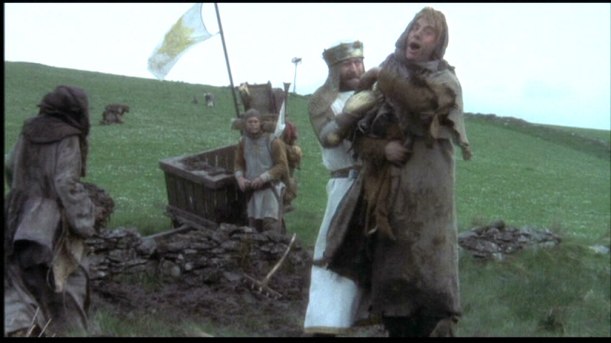 King Arthur: I am your king.
Woman: Well I didn’t vote for you.
King Arthur: You don’t vote for kings.
Woman: Well how’d you become king then?
[Angelic music plays… ]
King Arthur: The Lady of the Lake, her arm clad in the purest shimmering samite held aloft Excalibur from the bosom of the water, signifying by divine providence that I, Arthur, was to carry Excalibur. THAT is why I am your king.
Dennis: [interrupting] Listen, strange women lyin’ in ponds distributin’ swords is no basis for a system of government. Supreme executive power derives from a mandate from the masses, not from some farcical aquatic ceremony.

Dennis: Oh, but you can’t expect to wield supreme executive power just because some watery tart threw a sword at you. 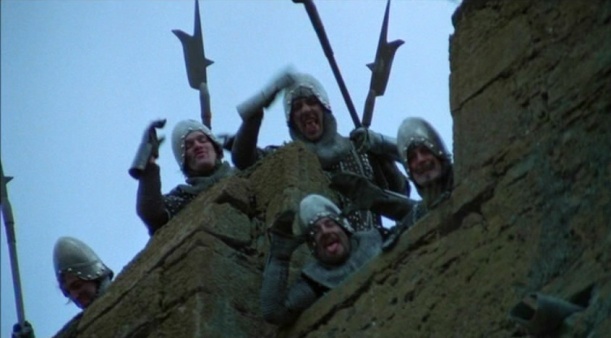 French Soldier: You don’t frighten us, English pig dogs. Go and boil your bottoms, you sons of a silly person. I blow my nose at you, so-called “Arthur King,” you and all your silly English K-nig-hts.

French Soldier: I don’t want to talk to you no more, you empty headed animal food trough wiper. I fart in your general direction. Your mother was a hamster and your father smelt of elderberries. 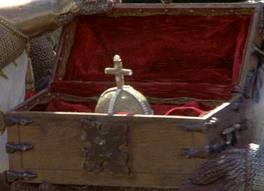 [Holding the Holy Hand Grenade of Antioch]
King Arthur: How does it… um… how does it work?
Sir Lancelot: I know not, my liege.
King Arthur: Consult the Book of Armaments.
Brother Maynard: Armaments, chapter two, verses nine through twenty-one.
Cleric: [reading] And Saint Attila raised the hand grenade up on high, saying, “O Lord, bless this thy hand grenade, that with it thou mayst blow thine enemies to tiny bits, in thy mercy.” And the Lord did grin. And the people did feast upon the lambs and sloths, and carp and anchovies, and orangutans and breakfast cereals, and fruit-bats and large chu…
Brother Maynard: Skip a bit, Brother…
Cleric: And the Lord spake, saying, “First shalt thou take out the Holy Pin. Then shalt thou count to three, no more, no less. Three shall be the number thou shalt count, and the number of the counting shall be three. Four shalt thou not count, neither count thou two, excepting that thou then proceed to three. Five is right out. Once the number three, being the third number, be reached, then lobbest thou thy Holy Hand Grenade of Antioch towards thy foe, who, being naughty in my sight, shall snuff it.

Enjoy this hilarious Monty Pythonesque take on the Ringwraiths from The Lord of the Rings. You’ll never view evil the same way again.